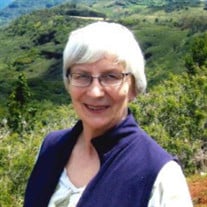 Albertha “Bep” Henrica Maria Morrison Barnes passed away peacefully on July 31, 2020, at the Circle of Life Hospice Home at Legacy Village in Bentonville, Arkansas from complications related to Alzheimer’s. Born July 26, 1943 in Heemstede, The Netherlands to Pieter Cornelis and Albertha Henrica Maria Snoeks, her early years were spent amid the occupation of her homeland during WWII. Bep finished school and attended secretarial college, where she later graduated and obtained a job with MK-Shand, an international pipeline company. She met her first husband, Joe Morrison, Sr. at the workplace, and they married in 1967. After her boys were born, Bep was a stay-at-home mom. There are many happy memories of her shuttling Joe and Earl’s shinty and soccer teammates to games in their family station wagon. She taught the boys soccer and was known to cheer from the sidelines, “Hup Joe/Earl, Hup”. Her sons also remember that she was the kind of mom who would listen without judgement and answer any questions they had about life and growing up. She was more than a mom—she was a friend. The family moved to Strathpeffer, Scotland, where her rose garden was a popular stop for tourists visiting the quaint village. They also spent many years in Gainford and East Cowton, England before moving to Siloam Springs, Arkansas in 1982. After becoming a widow in 1985, Bep returned to the workforce. She is most known as the beloved director of the Sager Creek Arts Center. Her leadership at the arts center included everything from grant writing and development to cleaning the restrooms. Her ready smiles and laughter made Bep a favorite of the Siloam Springs Community. In 2012, she was the recipient of the Siloam Springs Chamber of Commerce “Pioneer Citizen Award”. She also served a term as president of the Siloam Springs Rotary Club. Bep loved the arts, gardening, reading and driving (with a heavy foot!). She was fluent in four languages—Dutch, German, French and English and never lost her beautiful accent. Some of her best friends were the numerous dogs and cats that she cared for during her lifetime; however, her human friends and family could always count on a hot cup of tea and ginger snaps when visiting her home. Upon retirement and her second marriage to Tony Barnes in 2008, the couple enjoyed traveling/cruises, classic car shows and Friday night meals with friends. Bep was preceded in death by her father, mother, five siblings and first husband, Joe Morrison, Sr. She is survived by her husband Tony Barnes of Siloam Springs, Arkansas, two sons, Joe (Shellie) of Fayetteville, Arkansas and Earl (Tonya) of Kansas, Oklahoma as well as two grandchildren, Jacob and Riley. A private family service will be held August 7, 2020, at Grace Episcopal Church in Siloam Springs, Arkansas. Memorial contributions may be made to the Alzheimer’s Association, PO Box 96011, Washington, D.C. 20090. Please designate the Arkansas chapter.

The family of Albertha "Bep" Henrica Maria Morrison Barnes created this Life Tributes page to make it easy to share your memories.